ell, I finally made the leap back into the MOPAR ownership club.   But not just any owner club, I am now a member of the Challenger Scat Pack club!  I bought a 2016 Dodge Challenger R/T Scat pack with the 392 cubic inch, 485HP Hemi engine.  This purchase was a long-awaited return back to my Mopar roots.  For me, it’s about the enjoyment of muscle cars and heading back into the foundation of my automotive heritage, now it’s time to flex some Mopar muscle!

Ever since the new “retro” style Dodge Challenger was released back in 2008, I’ve been a big fan of the newer body style look, but I wasn’t at all impressed with the interior offerings.  Plain white gauges, a basic dash & steering wheel setup that looks like it came out of a mini-van.  A lot of the newer features that the competing manufacturers were adding to their cars, just wasn’t there.  In 2015, that all changed for the Challenger.  With a newly designed dashboard/cockpit and digital gauge cluster that closely resembles the “tick-tock” style dash like I had in my roadrunner, I instantly fell in love with the face-lifted version of this car!

Back in the late 70’s and 80’s, I was a Mopar fanatic.  My family owned several Chrysler products and I learned to wrench on them as a youngster.  They were all very similar under the hood, making them easy to maintain.  It was also no secret that I was a big fan of the Mopar muscle cars.  The Challengers, Chargers, Roadrunners and the Barracudas, those were the cars that I measured any other muscle cars against.  In high school, I owned a 1973 Plymouth Roadrunner with a small block 318.  Hold up – OK, it really was a Plymouth Satellite Sebring, but not for long.  When I acquired it, it looked like something my grandmother would drive, It was  sky blue with a white vinyl top, but once I was working as a mechanic and had access to a body shop, that grandma look didn’t get to stick around for long.

Built in 1973, my Satellite Sebring was equipped with the small-block 318 cubic inch V8 motor, with a Carter 2 barrel carburetor.  In this year, they offered 2 different slant-6’s, 3 different small block V8’s and 2 big block V8’s for this car.  At the time of the build, the 318ci/2-barrel motor was the most common configuration for this car and only produced a mere 150HP.  Keep in mind that a 4,000 pound car, pushed by a small V8, with only 150HP is not much push for a car intended to become a “muscle car”.  That being said, prior to the upgrades, she drove like a lazy sled.  In comparison, the 340ci engine with the 4-barrel carburetor produced horsepower ratings in the 240HP range, which was more of the performance direction I wanted my car to go.  After I completed a new paint job on the outside and replaced the old worn and weathered vinyl top, I started the mechanical upgrades.  We pulled the 318 and sent it off to the machine shop for some much needed rejuvenation.  Thanks to Summit Racing, the new engine was equipped with .a set of higher compression Wiseco pistons and connecting rods, an Edelbrock Performer 4-barrel intake & cam set, a new timing chain set, the heads were rebuilt with new valves and springs, new guide seals were installed, new push rods & lifters and a high volume oil pump.  To top it all off, I acquired a Holley 700CFM carburetor from a friend, which was rebuilt and installed, then tuned up and an anodized blue Edelbrock air cleaner and valve cover set was installed.  Once the engine upgrades were completed, she sure was a pretty sight to see, but there was still more work to be done.  Once the motor was installed and broken in, I pulled the transmission and sent it to a buddy of mine who builds them and the A904 torqeflite was off for sme needed rehab and strengthening.  The inside was completely rebuilt with a B&M shift kit and new Cheetah valve body.  For the exhaust, we installed a set of Heddman headers and alumanized duals were hung with Thrush turbo mufflers, which gave a nice rumble.  Once all was completed and everything was properly dialed in, chirping second gear from a hard shift into second gear was quite easy for such a big and heavy car, especially with the tall 3.73 gears in the rear end.  But alas, there was still more to do.

Under the car, I knew I had some aging front end parts, so a complete Moog front end replacement went into the car.  Ball joints, tie rod ends, pittman arm, torsion bars.  The whole works.  The footing for the car was also upgraded as well.  Cragar SS wheels and new Michelin tires were installed.  Then it was on to the interior upgrades.  This is where the roadrunner look and feel really took place.  The old bench seat was replaced with a set of factory bucket seats with new skins.  A roadrunner center console was installed and retrofitted to accept a floor mounted, aftermarket shifter.  Given the amount of work necessary to get an OEM shifter and linkage to bolt in and align properly, I decided to install a Hurst ratchet shifter instead.  The Hurst shifter is cable driven and very easy to mount and install/adjust to fit, so she slid right into the factory console with zero issues.  Even the factory shift position indicator light was reinstalled and working like a champ.  I then removed the old 120MPH sweep speedometer and replaced the whole dash cluster with the roadrunner 150MPH “tick-tock” style woodgrain cluster, which was a 1-for-1 swap with no issues.  All the wiring plugs and A/C controls were an exact fit.  The only issue I had was my existing dash had an aftermarket tape player and the new dash had to be cut so the radio would fit properly (diting the old two knob radio setup), then dressed it up to hide the installation cuts and gaps.  I then replaced the hood with a roadrunner style hood and installed a hood mounted tachometer, so I could easily see the tach and keep my eyes on the road without having to look down at the dash.  All new carpet inside the car and in the trunk too, replacing that plastic trunk liner they include with the car.  After finishing off the interior with a new headliner, she was looking really sweet!

When I was done with the mechanical work and the face lift, she was a pretty stout street machine, with some decent grunt to it, for a small block V8.  Though my engine was still technically a 318ci motor, I could take the 340 dusters when I needed to.  I am not really sure how much horsepower this car was actually producing, but if I had to guess, I would imagine she was pushing 250HP to 275HP with all the performance upgrades installed.  I drove this car for several years and loved it.  Soon after college, I was given a Chrysler Cordoba with no attachments, so I sold the Satellite.  I didn’t need two cars and I thought going to the Chrysler meant less maintenance and a little luxury along the way, but I was severely mistaken.   In hindsight, I wish I never chose the Cordoba over the Satellite.  At this point, I had no clue where my old car went because the guy I sold it to changed phone numbers.  Alas, my favorite car on the planet was gone, quite possibly forever.

Fast forward to about 20 years or so later, the Chrysler group started releasing some pretty sweet looking vehicles.  I was intrigued by the new Chrysler 300 and the Dodge Magnum.  Not long after, the newly renovated Chargers started showing up.  I pondered if the new Charger was going to be one of my new rides.  I liked the car, but was very disappointed by the interior, so I waited to see if it was going to be improved.  I heard rumors that a new Challenger was in the works, this was ultimately what I would have wanted – a 2-door muscle car like the good old days, so I waited even longer to see what was to come.  Turns out that Dodge did release a new style Challenger and I quickly went to see one, only to be severely disappointed.  I quickly discovered the new Challenger had the same crummy dash design as the new Chargers.  It did not take long for me to realize that I am not going to make $400 a month payments for a car I was not impressed by.

Fast forward again to late 2016.  I went to lunch with a friend who was given a rental car because his was in the shop.  The dealership gave him a 2016 Charger R/T with the 5.4L Hemi to drive for the day and I got take a ride in this new gem.  Once I saw the new dash, it immediately sparked the interest to go look at the again to see if the new dash design was also implemented into the Challenger lineup and to my delight,  it most certainly was.  It was then that I started looking at options and packages and went on the hunt for a Challenger.  After looking at several new cars, it was very easy to see that the dealerships were in no hurry to deal on any cars that fit the setup Io was looking for.  I initially tried working with some dealerships on pricing for a 2017 Challenger in the “Go Mango” color, but for some reason, nobody would budge on their prices.  It was after walking away from about 3 deals that I learned that my fiance had a cousin that has strong ties to the dealerships and has access to the dealer sale network.  Within 30 minutes of him asking me the model and color I wanted, he called me back and told me what I should expect to pay for a car and what options would be on it, the numbers were ugly.  I found out later that there was a very limited numbers of used cars available in the Mango color, he asked if I liked any of the other colors.  I told him my second option was the B5 blue, so he pointed me to a lot that was only 25 minutes from my home,  that I never even knew existed and I scored a B5 blue R/T Scat Pack car at a phenomenal price.  I only took me a couple short days to get my financing in place and get my tax return in-hand for a decent down payment and go pick up my new car! 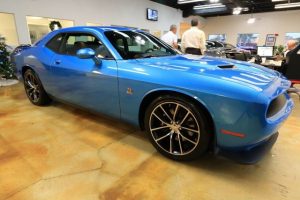 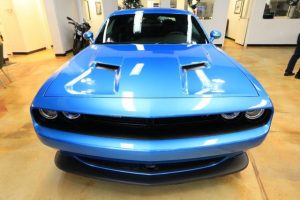 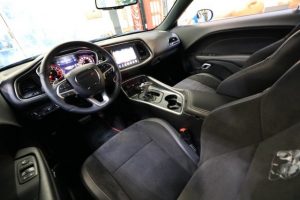 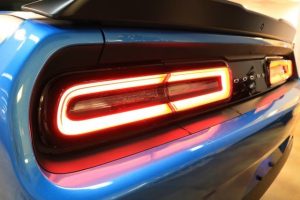 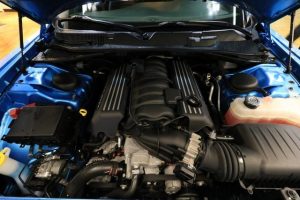