Since completing my smoker build, I have been carefully testing my cooks as well as learning all the temperature behaviors of it.  With a wedding coming up soon and considering the amount of people that are going to be eating what I am going to cook, I had concerns about maintaining and mastering the cook temps, because as we all know, the pit temps dictate the cook times and food quality.  Have you ever started your smoker and got distracted by doing something else, only to find out your pit temp took a nose dive?  My pit needs fuel tending about every 90 minutes to maintain a solid pit temp. For most cooks, I start my cook in the early morning and smoke the food for a typical meal time of around 5PM.  If I get distracted, no worries, I can just tell people it will be a little while longer before we eat.  Think I can get away with that stunt at a wedding with 125 hungry guests?  Not me!

For the wedding cook, we bought three packages of Boston butts.  These are the double sized ones, weighing in at around 20lbs each package!  The more I think about how long it is going to take to cook these butts, the more I want to bring my smoker’s temperature reliability factor to the next level.  With these monster butts, I know it is going to take longer for the core of the meat to get into the desired 205 degree finish temp, which means I am going to start these things in the middle of the night to make sure the finish temp hits the mark before I had to head to the wedding. 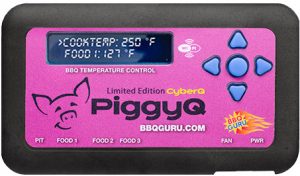 The solution:  The BBQGuru!  The guru is offered in two different models for smokers, the DigiQ and the CyberQ.  They offer a third style, but there’s no temperature probes for the meat, so the low end unit (called the PartyQ) was out of the question for me because it’s more for the charcoal grill fanatics.  The DigiQ offers one pit probe and one temp probe with no remote control features.  The image shown is the limited edition CyberQ “PiggyQ” model, which is the one I bought for myself for Christmas.  Both features the proven “oven style temperature control”, but the CyberQ includes one pit probe plus three food probes, wifi viewing and the ability to make temp setting changes remotely as well as a few other options.  This device is the proverbial Swiss Army knife of cook controls.  Using fans that control the amount of air drafted into your firebox and a pit temp probe, the unit feeds the firebox with the right amount of air to reach and maintain the set temperature within a couple degrees.  My favorite part about this unit?  I actually have two:  1) Extending the length of time between tending the firebox.  Because the fuel and air input is precisely regulated, your heat source run times will be extended and predictable.  That means I can go almost 2 hours before my next firebox tending.  One of the side-benefits to this level of temperature control, it automatically tames the typical temp spikes of opening the firebox door for adding fuel.  To the untrained pitmaster, this may not sound like a big deal, but when you open the firebox to add fuel, it both allows a rush of oxygen into the firebox which spikes the pit temp, plus the new fuel ignites and increases the pit temp as well.  Previously, I have seen spikes in the cook chamber of over 350 degrees and watch it hang there for (what seems like to me) a very long time, sometimes almost an hour.  With the CyberQ, the reduced air input tames the runaway flame.  2) My other favorite feature found on the CyberQ is the remote view/control capability and alerting that the system offers.  This is a great thing when you’re starting a long cook in the middle of the night and want worry-free hours of sleep between firebox tending.  Another scenario is when you need to run to the store for something, that same level of temp control allows you to make that trip with a lot less stress over your cook.  While you’re out, If you suddenly get concerned and want to see the pit temp, then just open your smartphone’s pit control app or web favorite browser and check it.  From the app/browser, you can not only see your pit temp, you can also see all of your meat temps, without even being next to your pit.  If by chance your pit temp starts to drop and it cannot recover the set temp by running the fans at 100%, it will text or email you that there’s an issue with the pit maintaining the set temp!  I also had an issue where I had to run out and the cook finished sooner than I thought it would, so this unit has a “ramp” feature so you can force the cook to slow towards the finished temperature.  If needed, you can even shut off the fans and choke out the fire and stop the cook.   I can tell you, just these features alone is well worth the money spent on a CyberQ!

February’s wedding cook came quicker than I had ever imagined. All the design planning, all the work to build the cooker, all the test cooks, mastering the pit temps. Today was the day to make it all come together.  Stressed? You bet I was. The day of the wedding, I started prepping around 12:30 AM. Setting up the CyberQ, starting the fire, injecting the pork butt, dusting the outside of the butts and a little rest time for the meat before going into the cooker.  At 2:15AM, the meat finally performed the ‘symphony of sizzle’ as the meat hit the racks. From this moment, in just a little over 12 hours, the happy couple will take their vows together and soon after, my cooking reputation is openly exposed to the opinions of 125 hungry people. The smoker ran for about 7 hours, kissing the pork with that awesome smoke flavor. Once the internal temperature of the pork reached about 170 degrees, it was time to foil them up. The butts were put into aluminum pans with apple juice in them, then covered for the remainder of the cook. Somewhere around noon, the internal temperature of the pork reached 205 degrees. It was now time to remove the pork from the cooker and let them rest. I loaded the finished product into coolers to rest until it was time to eat. The ceremony was at 3:00 with dinner planned for 4:00. The porkt butts steamed in the coolers (still foiled up in the pans) for close to 4 hours before they were removed and served.  In a nutshell, the final product was like nothing I had ever cooked before. The pulled pork was pure BBQ perfection and the feedback I received was incredible.  Mission Accomplished!!